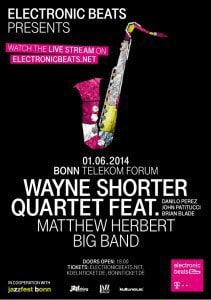 The Britt Matthew Herbert is being considered as a luminary of electronic
and experimental music and has published several electronic albums under the
pseudonyms Wishmountain, Radio Boy and Doctor Rockit, which were influenced by
jazz. In 2001 the Matthew Herbert Big Band was formed, in which Herbert accentuates his unique band style in a
groundbreaking way and therewith lets jazz and electronic music amalgamate into
a live experience.